For more information on Sharon Hollingsworth and Brian Stevenson please see the sidebar for the About Your Humble Bloggers link.

NOTE: POSTS AT ELEVEN MILE CREEK ARE ARCHIVED MONTHLY. IF YOU ARRIVE HERE AND THE LANDSCAPE LOOKS BLEAK AND STARK GO TO THE BLOG ARCHIVES. THERE IS WHERE YOU WILL FIND THE VERDANCY. 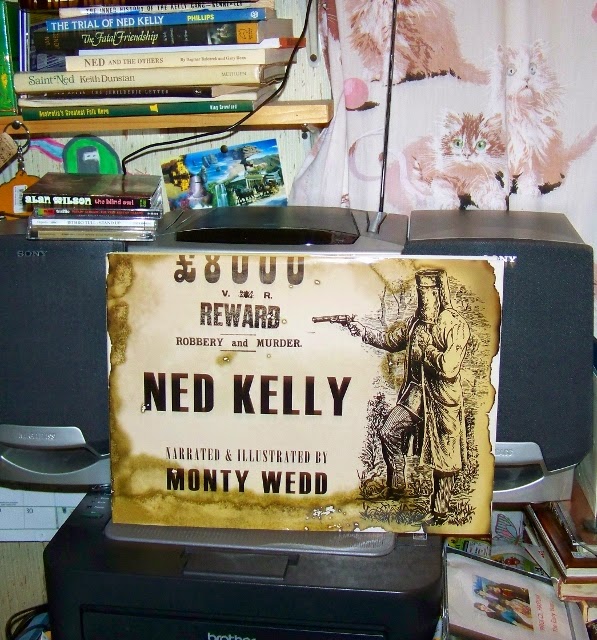 Sometimes wishes do come true! For the better part of a decade I have been very keen for Monty Wedd's Ned Kelly newspaper comics series (which originally ran in Sydney's Sunday Mirror and was syndicated in other Australian newspapers between 1974 and 1977 for a total of 146 "episodes") to once again see the light of day. On forums and blogs I have, again and again, lobbied and wished for it. What I had put on one of the earliest blog posts here at Eleven Mile Creek back in 2010 was this:


At the top of my wish list/(book) bucket list  is what has not been published in book form - Number 770 in WTSAN - Monty Wedd's "Ned Kelly" comic strip...one hundred and forty six episodes of it...talk about sugar plums! Hopefully one day someone will finally gather and publish these comics for the enjoyment and edification of all of us.

Then, in January of 2013 I was alerted to the fact that a gentleman named Nat Karmichael had been in negotiations with Monty Wedd (and later the Wedd family after Monty passed away in 2012) to publish the series in book form.
There were many twists and turns in bringing his vision to fruition, but FINALLY this magnificent volume has been made available for sale to the general public. This book is HUGE in scope and dimension. (One website has the size as 250mm x 350 mm. As you can see from the photos in American measurements it is nearly 10 inches high by 29 inches wide from edge to edge.) I want to give a big thank you to Brian McDonald (who wrote the foreword for the book actually got to meet Monty while they were both guests on a tv program)  who kindly and generously gifted me with a copy. Brian sure was right when he said of Monty Wedd in his foreword: "His presentation of Ned Kelly's life is enthralling and you can see Monty's ardour for our history in every panel." 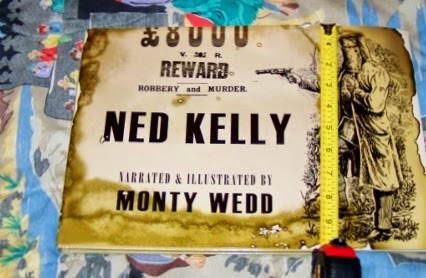 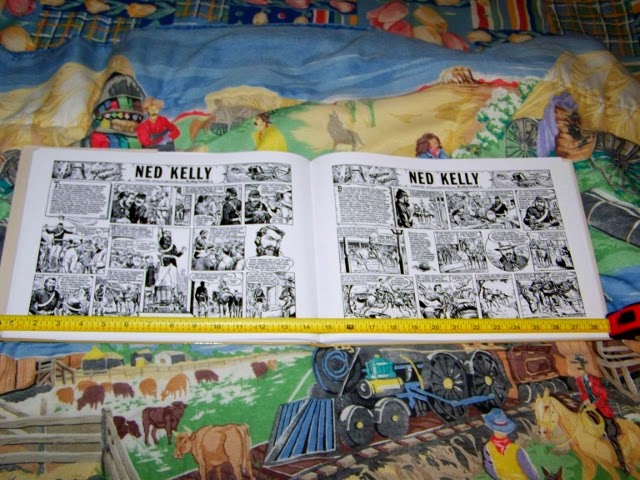 After Brian McDonald's terrific foreword there is a page by Justin Wedd entitled "My Father, Monty Wedd" in which he gives the reader a little background into his father's very illustrious life.
Next in the book comes an introduction written by Roger Fletcher (creator of Torkan and Staria comic strips) in which he talks about Monty's style of illustration and his friendship with him.
Next we have a page with the background history of the Ned Kelly comic strip that is very enlightening and whets our appetite.
THEN we get to the meat of the matter...the comics themselves!
Each week's comic strip has its own page and the panels, which I can imagine were a bit smaller in the original newspaper run, are really big and easy to read. Sometimes looking at the comics in my local paper I have to use a magnifying glass to read the text, but not here. It is large and crystal clear. The best part of these illustrations is how you can actually see the emotions being conveyed on every character's face. Monty did an amazing job. I can imagine that these weekly comics would have kept the punters on the edge of their seats anxiously awaiting the next installment as he ended every strip on somewhat of a nail-biting cliffhanger. You are left wondering how Ned and the boys are going to get out of the latest pickle or problem. The modern reader need only look to the right or turn the page to find out without having to wait! Those of us who have studied the Kelly story for many years generally know the outcome of the cliffhanger but for those who are new to the story (and this book should make for some renewed interest in Ned Kelly particularly among the young) will be tantalized.
All major aspects of the Kelly story are covered with barely any mistakes in fact. I found a few things, but those did not detract from the enjoyment of the story (such as what Red Kelly died from, George Metcalfe's wounding, also the strip has how Ned brought back money from his time with Power which clearly was not the case as all he brought back was an empty belly, a lot of dirt and a bad habit.) Also, a small handful of other things, one of which I bet that has Francis Hare turning over in his grave as he was not mentioned at all in the capture of Harry Power but instead Nicolson gets the full faith and credit. Again, none of this detracts from the enjoyment of this unparalleled series.

The comics surely entertain and educate and live up to Brian McDonald's assessment. In these panels there were sad moments, glad moments, worry, angst, heartbreak....the full gamut of emotions are run in these 146 episodes. I am still chuckling over the panel where Steve Hart, disguised as a woman, has to nervously ride past some police troopers. One of the troopers says aloud: "There's a pretty one." Steve Hart's thought bubble says "To think that I've been fancied by a trap." Good stuff! And fun!
At the end (and I did not want it to end!) there is a page with a Tribute to Monty Wedd which is a speech by Craig Baumann, MP, Member for Port Stephens, given to the NSW Parliament shortly after Monty's death in 2012.  He gives a glowing speech and there is some good detail in that about Monty's private military museum which sounds like a wonderful place to visit.
I am hoping that everyone can get a copy of this long-awaited book. I am wondering if the publishers are maybe planning on more of a budget version for those who might not be able to comfortably afford this deluxe hardback because this book should be on the book shelf of every Kelly fan in the land. This is a volume to treasure!

I have also seen this on offer from the Angus and Robertson bookseller website and at ebay.

Posted by Sharon Hollingsworth at 10:02 PM

All comments will be reviewed by the administrator before being published.